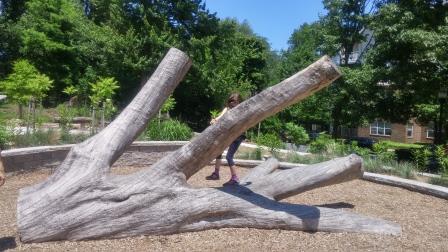 Not far from downtown Washington, D.C., kids perch on tree branches, dig in the sand, and busily port sticks from one place to another. An adult rests on a swinging bench while someone else sniffs a drift of coriander. This is Constitution Gardens, a different kind of park.

It all started with a competition. The city council of Gaithersburg, Maryland wanted to enliven a sliver of public land that had devolved over the years into a dull, little-used cut-through. The renovation should reflect the many new cultures that now infuse the locale. The new park would be an antidote for what Last Child In The Woods author Richard Louv calls “nature deficit disorder,” a malaise that settles over children when they don’t have enough time outside.

Nancy Striniste was delighted when her all-female local landscape design firm beat out two nationally-known companies. Her nature-based plan would “really get kids outside and connected to nature and playing in a deep, rich, extended and creative way,” while reflecting the city’s natural environment and cultural history. Play areas would be low to the ground, involving kids’ bodies and minds much more than playgrounds of swingsets and slides, which focus mostly on large-motor movement. Striniste’s would be the first “nature-play-themed” city park in the National Capital region.

As Canadian nature playground builder Adam Bienenstock pointed out in the last post, nature-based playgrounds build balanced, durable kids because “all their senses are engaged.”

Striniste’s park leaves no corner uninvigorated. Play structures are built from the sturdy branches of local locust trees and a salvaged massive maple that had been marked for removal. Herbs in the mystical-looking spiral garden are the same that infuse the dishes cooked by the culturally-diverse communities of surrounding neighborhoods. Her “Logtown” climbing area evokes a time when the local economy was supported by wood milling. But what the designer may be most proud is that her park gives kids living in nearby apartments and townhouses a backyard of their own. 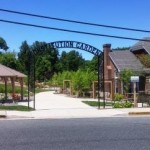 Constitution Gardens is located in Gaithersburg, Maryland, about 26 miles outside Washington, D.C. 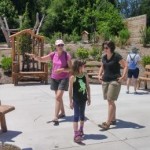 The “Lost Library” reading area stands on the site of a city library that was destroyed by fire. Designer Nancy Striniste is in purple. 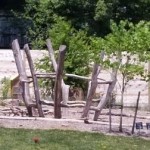 Native locust trees were used to make the “Bird’s Nest” climbing structure, which is especially popular with teens. 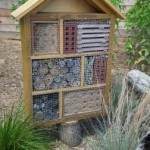 Bees, ladybugs, lacewings, and other native creatures reside in the Insect Hotel. 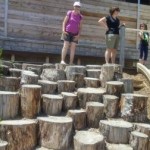 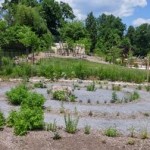 The medicinal and culinary plants in the spiral World Herb Garden are typical of those used by Gaithersburg’s culturally-diverse residents. 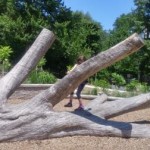 The heart of a large red maple that had been marked for removal was repurposed into a climbing structure. 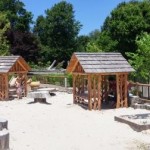 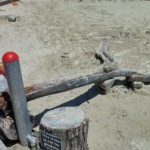 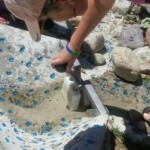 Rainwater is channeled for play and retained onsite within the park’s landscaping and five rain gardens. 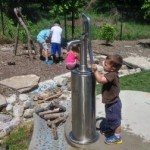 As a child operates a pump, others play behind him with park-supplied sticks, small logs, and other loose natural objects.

Striniste vetted the park with a safety specialist and the Access Board so features in the park are safe and almost all ADA-accessible.

At the grand opening they served lemonade made from the native staghorn sumacs that have been returned to the landscape. Sumac trees were once used in another former Gaithersburg industry: the dying of leather.

To learn more about how to embrace your own nature as you live in harmony with your technology, I invite you to check out the tips and tricks in How To Be a Durable Human: Revive and Thrive in the Digital Age Through the Power of Self-Design.

In the meantime, download this free checklist for how to plan your family’s time wisely!

Get info about this author on Google+.